Ernestine Shepherd began her fitness journey at age 56 and now she inspires others to get into fitness - whatever their age.

Ernestine Shepherd began her fitness journey at age 56, and at age 71 she won her first bodybuilding competition. Now she inspires others to get into fitness – whatever their age.  Meet the 81-year-old woman who can bench press 115lb.

She talked to The Independent about the particular ordinary route which let her into fitness. Why she was motivated to go for a world record title and what she eats every day.

According to Ernestine, she has always been asked for bodybuilding advice in the gym. Well, I would ask for some advice as well if I have the chance. I mean, who wouldn’t?

But before we jump into Ms Shepherd’s life, make sure to pick your best leggings if you will go for a run today or to the gym today. Go for leather leggings or mesh leggings or go for workout leggings!

The Life of Ms Shepherd

Ms Shepherd gets up at 2:30 in the morning every single day. After her devotions and meditations, and after having her breakfast, she goes for a run in her hometown in Baltimore.

She always makes sure her weightlifting workouts focus on all the key areas. She focuses on her chest and biceps on Mondays. While shoulder and triceps on Wednesdays, back and legs on Fridays.

Take note, the woman we’re talking about here is already 81 years old! How inspiring she is!

“Despite how important it is to me now I haven’t always enjoyed exercise. In fact, I didn’t set foot into a gym until I was 56. I was always too prissy to work out – and you couldn’t get me away from the chocolate cake. But the year I turned 56, my sister Velvet and I went shopping for swimsuits. Neither of us had worn one for years. We looked in the changing room mirror, and made a pact to get in better shape.”

Spurred into fitness with her sister Velvet at the age of 56, she previously had never done any exercise having been exempt from school physical education lessons as a child because of an injury she sustained in a car accident.

They started off doing aerobics but when they moved on to lifting weights and, eventually, they got into bodybuilding. According to Ernestine, one day, her sister, Velvet, turned to her and said, “We should try and get into the Guinness Book of World Records as the oldest bodybuilding sisters in the world!” Then it became their goal.

‘Sadly, shortly after, Velvet got sick and suffered a brain aneurysm. “I want you to continue what we’re doing even though I won’t make it,” she told me, just before she passed away. “I want you to inspire other senior ladies, and anyone who will listen, to exercise.”

She fell to pieces when her sister died. She didn’t know what to do because Velvet had always been right there with her.

After some years had passed, she finally decided to honour their pledge. Then she contacted the former Mr Universe, Yohnnie Shambourger.

According to her statement, they’d met a few times at his bodybuilding shows. When she asked whether he could help her get into the Guinness Book of World Records, he replied, “Yes, but you have to go on a long journey: do you plan to hang in there?”

The Baltimore native was crowned the world’s oldest competitive female bodybuilder in 2011 by the Guinness book of world records. She has washboard abs, impressive biceps and lives on three to four hours sleep every night.

The Independent spoke to a snowed-in Ernie on the east coast of the US on the phone which finally connected after the theme tune from Rocky blared down the line for a minute or so.

“When you call my phone, you hear Sylvester Stallone’s music because I was inspired by his movie… and how he had to get his life back together and how he drank the egg whites, and I drink egg whites now because of Rocky,” she explains.

‘“I’ve done what you wanted, Velvet”, I remember saying as tears filled my eyes. I had carried some of her ashes with me, and when no one was around, I went outside and spread them as far as I could.’ 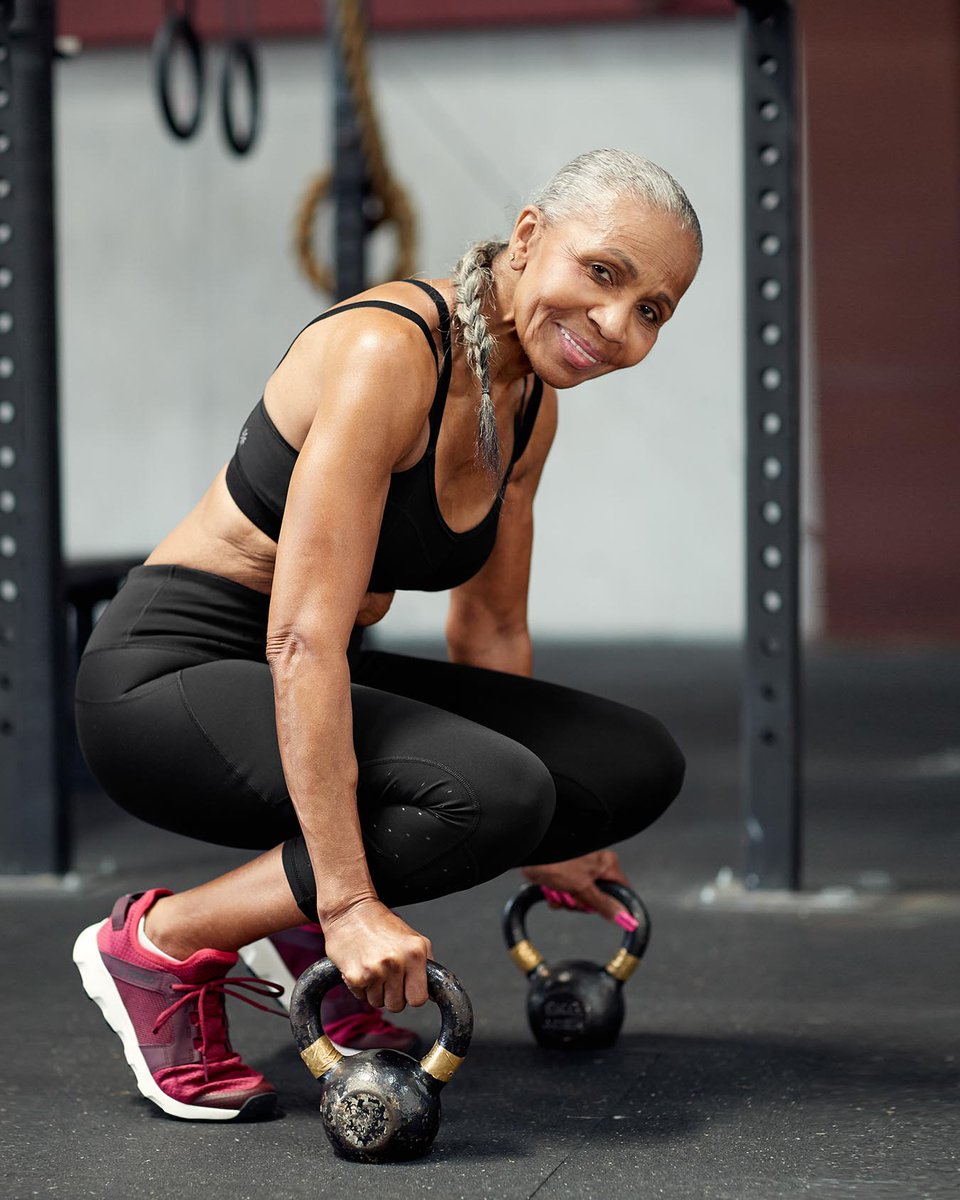 “I’ve never felt self-conscious about being a bodybuilder at my age thanks to a mantra Velvet passed on to me: ‘Determined, Dedicated and Disciplined’. If you follow these three D’s no matter what you’re doing in life, you can succeed. That’s what I live by, and that’s why I always tell people that age is nothing but a number.”

She loves lifting weights in nice workout clothes and sometimes in heels because she thinks they look great with her workout outfits. She also keeps her nails well-manicured. Of course, it’s an intense lifestyle. She also doesn’t take supplements like some bodybuilders: she keeps everything natural, and she eats the same food every day.

“After my two breakfasts ­– an 8oz glass of liquid egg whites, a handful of walnuts, a bowl of oatmeal before my run, and four boiled egg whites when I get back – I have three further meals throughout the day. That’s either chicken, tuna fish or turkey with a baked sweet potato, white potatoes, mixed vegetables or brown rice.

I don’t want to eat junk food: my ‘treat’ is un-sweetened jelly, and I drink lots of water. I’ll have my last glass of liquid egg whites before bed. I know my diet won’t be for everyone and I wouldn’t advise people to suddenly start eating like this without speaking to a doctor or dietician, but it works for me.”

According to her, young men are always asking her what she eats, as well as asking for bodybuilding advice when they’re working out the gym. She tells them they’ll end up lifting heavier than her! Proudly, she has helped some of them to become trainers. 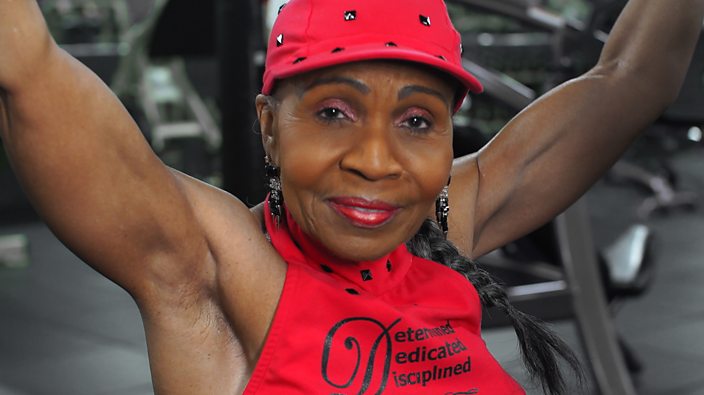 “I like to think she, Velvet, is looking down on me with pride.”

When she was competing, she was bench-pressing 150lb. Right now, it’s about 115lb, and she can lift 80lb with the pull-down machines. She enjoys working her back the most.

Whenever she looks in the mirror, the feeling of being healthy makes ‘happiness’ wraps around her body and soul. She loves how bodybuilding gives her the definition.

‘I’m still surprised by the amount of people who say I’ve inspired them. I get recognised as ‘that lady’ all the time, and I’m never too busy to stop for a picture or give someone a hug. Motivating people has become my ministry – I get invited to do talks all around the country and I organise a community walk once a month where 100 people, including lots of senior ladies, come out to join me. They help me too, though. I always say I am nothing without the love of people.

When I look back at 56-year-old me, I can’t believe how much life has changed. I’m not that shy lady anymore. I am 5ft 4, I weigh between 118-120lb, and I can go anywhere and not feel intimated by anyone. Bodybuilding has given me an amazing sense of confidence. It’s my joy, and 25 years on, I’m still having the time of my life with it.

I have a doctor keeping an eye on me and at my annual check-ups, he tells me to continue what I’m doing – and I will, for as long as I can. My next goal? To meet Sylvester Stallone. I learnt so much about motivation through the Rocky movies – it’s why anyone who calls me will hear the hear the usual dial tone, but then before I answer it they’ll hear the Rocky theme tune. I want to be able to touch his hand and tell him how much he has inspired me.’

Types of Workout Tops for Every Kind of Exercise